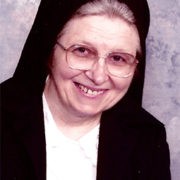 Patricia Anna Gazdo was born in Uniontown, PA, on February 11, 1942, the second of four children and the daughter of Peter and Suzanna (Brinza) Gazdo.

Patricia attended Holy Rosary School in Republic, PA, and completed her education at Immaculate Conception School, Middletown, PA.  In 1961, she graduated from St. Cyril Academy, Danville, PA. Patricia entered the Sisters of Saints Cyril and Methodius in Danville on September 8, 1961, was received as a novice on August 13, 1962, thereafter known to all as Sister Cynthia Marie. Sister made her first profession on August 13, 1964.

At Emmanuel, Sister Cynthia Marie was often seated in the area in front of the nurses’ desk in the 100 wing. There she radiated a contagious smile, welcoming anyone passing by or stopping to speak with her or any of the other residents there. Residents looked forward to being positioned near her since her light-hearted disposition was entertaining and comforting to them. Sister Cynthia Marie was genuinely happy to see anyone—and generous with sharing her delight in being present to them.

Sister Cynthia Marie’s friends were loyal and faithful, the loving kind of people who are attracted to that same kind of faithfulness which they found in her.  Sister Cynthia Marie went home to God on April 3, 2020, at Emmanuel Center, Danville, and buried four days later. Everyone misses her smile.