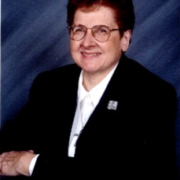 Sister Elizabeth Ann Matonak, the former dietician at Maria Joseph Manor and Administrator of the Meadows, died at Emmanuel Center, Danville, PA on Sunday, March 6, 2022.  The daughter of Andrew and Elizabeth Matonak, Sister was born on February 22, 1936, in East Vandergrift, PA. Growing up, she attended public schools in Vandergrift and East Vandergrift, PA.

Sister Elizabeth Ann entered the Sisters of Saints Cyril and Methodius on September 8, 1954, and was received into the congregation on August 3, 1955, when she received the religious name, Sister Miriam Pius.  On August 6, 1957, she made her First Profession of Vows.

Sister received her BS in Home Economics from Marywood University, Scranton, and did her dietetic hospital internship at Cornell University in New York City.

From 1957 to 1964, Sister used her culinary skills at St. Cyril Academy and was a dietitian at Maria Joseph Manor from 1964 to 1988.  In 1989 Sister became the Director of the Meadows and was also Director of Food Services there. In her later years, she served as a companion to the elderly.

One of her major accomplishments was serving as one of the development consultants for the building of Emmanuel Center and Nazareth.

Sister belonged to several dietetic associations and was a member of Pi Alpha Alpha, the honorary society for public administrators (Marywood Chapter) and served as secretary from 1987 to 1988 and vice-president from 1988 to 1989.

Sister Elizabeth Ann was preceded in death by her parents, her brother, Lawrence, and her sister Dorothy. Sister is survived by her sister-in-law, Patricia Matonak, her nieces, Mary King and Anne Marie and Theresa Matonak, and her nephews Nicholas, Daniel, Andrew, Anthony and Timothy Matonak.

There will be a private Mass of Christian Burial on Friday, March 11, 2022, followed by interment in the Villa Sacred Heart Cemetery. The Mass will be live-streamed at 2:00 pm and the link can be found on the Sisters of Saints Cyril and Methodius website at www.sscm.org.