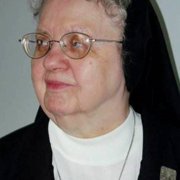 Florence graduated from Holy Trinity School and Swoyersville High School after which she entered the novitiate of the Sisters of Saints Cyril and Methodius on January 9, 1944. She was received as a novice as Sister M. Hilary on August 16 of that year. Sister made her first profession on August 13, 1946.
Sister Florence Marcin received a B.S. in Education from Marywood College, an M.S. in Education from DePaul University, Chicago, IL, and a B.S. in Nursing from Cornell University.

Sister Florence’s first teaching assignment was in the primary grades in Perth Amboy, NJ, Bridgeport, CT, and Charleston, SC. Later she taught grades 4, 5, 6, 7 and 8 in Charleston, SC, Philadelphia and Phoenixville, PA, and Chicago, IL. During those years she served as superior and principal for six years.

After receiving her R.N., Sister spent the rest of her life in ministry as a nurse at Maria Joseph Manor and Maria Hall. Later she worked in Medical Records and performed clerical duties before embarking on the ministry of prayer and hospitality at Maria Hall in her later years.

Sister Florence’s dedication to her family was proven by the record crowd at Maria Hall chapel on the day of her funeral. So many turned out to pay their respects to “the matriarch of the family” as her brother Joe called her.

Another testimony to the courage and endurance of Sister Florence came from Sister Mary Kathleen Moore, one of the Sisters of the Good Shepherd who lives at Maria Hall. “I asked her how she dealt with the serious loss of her eyesight.” Sister Florence explained that she didn’t want to be a grouch. “I can still pray. I have a whole list of people to pray for.” We have no doubt she is still doing just that.