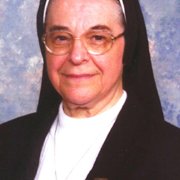 Mary entered the Sisters of Saints Cyril and Methodius, Danville, on September 11, 1945, and on August 13, 1946, she was received as a novice, Sister M. Cabrini. Following her profession, Sister Cabrini received a B. S. in education from Marywood University and later an M. S. from Scranton University, also in education.

For over forty years Sister Cabrini taught in parish schools in New York, Pennsylvania and South Carolina also serving as principal/local coordinator for twenty-one years. Later Sister served in various capacities at Maria Hall and Maria Joseph Manor, Danville, among them, receptionist, appointment escort and Coordinator of Volunteers. For eight years Sister was local coordinator at Maria Joseph where she also became a resident visitor.

The key to understanding Sister Cabrini’s success as a religious Sister lies in the small notebook written in her shaky handwriting that Sister Michael Ann found among her belongings. It contained a prayer asking God to help her to be loving to everyone she met. Everyone knows that request was granted because she was universally known for her kind demeanor and perpetual smile. Wherever she ministered she was much loved, especially at Maria Joseph where she spent her last years in ministry and later as a resident herself.

Though always pleasant, Sister Cabrini had to deal with serious illness. She contracted Guillain-Barre disease when she was missioned to St. John the Baptist School in Pittston. Paralyzed from the waist down, she prayed for a miracle to Sister Maria Kaupas, foundress of the Sisters of Saint Casimir. She recovered and spent the rest of her life in fruitful ministry. At the end of her life, she fell ill and though she had recourse to contemporary treatments, they ultimately proved unsuccessful. In response to the doctor’s explanation of what would occur after the blood transfusions were stopped, she responded, “It’s ok; I’m ready.”