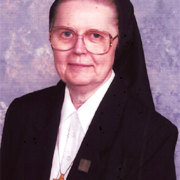 Bernardine Biel was born in Whiting, IN, the daughter of Stephen and Mary (Chomistek) Biel. She attended Immaculate Conception School and Junior High and graduated from George Rogers Clark High School, all in Whiting, IN.

Bernardine entered the Sisters of Saints Cyril and Methodius in Danville on September 8, 1950, and was received as a novice on August 9, 1951. As Sister Cyrilline, she professed her first vows on August 13, 1953.

Sister Cyrilline received a B.S. in Education from Marywood University, Scranton, PA, and an M.A. in Business Education from Catholic University, Washington, DC.  Her initial ministry in education spanned from 1953 to 1961 when she taught in the elementary schools in Hazleton, PA, Chicago, IL, and Torrington, CT, in Grades 2, 4, 5 and 6.  Later, on the secondary level, Sister Cyrilline taught business classes at Andrean High School in Merrillville, IN, for a total of 17 years.

In 1973, Sister Cyrilline was appointed Directress of Novices in Danville, PA, a post she held until 1979. The community called upon her in congregational administrative positions from 1980 to 1988, and from 1992-1999 during which time she also served as General Secretary for three years.  In 2000-2001 Sister Cyrilline did clerical work at St. Catherine Labouré School in Harrisburg, PA.

Returning to St. Methodius Convent in Danville in 2001, Sister Cyrilline performed General Duties, served as Local Coordinator and Director of Candidates.  In 2018, Sister Cyrilline retired to Maria Hall, Danville, PA, and engaged in the Ministry of Prayer and Hospitality.

Sister Cyrilline held many positions of trust in the congregation.  Many Sisters have affirmed her treasured contributions to community. They remember her as prayerful, kind, interested in the Sisters as individuals, charitable and very patient, affirming and a great resource person, especially in spirituality, reassuring when there does not seem to be a solution to a problem.  Going peacefully to God without fuss or fanfare was certainly in keeping with Sister Cyrilline’s pattern in life. She will be greatly missed.