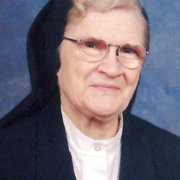 Sister Paulette (Mary Theresa Lendacky) died at Emmanuel Center, Danville, on October 23, 2019.  She was born in Swedesburg, PA on January 26, 1927, the daughter of Albert and Pauline (Posivak) Lendacky.

Mary Theresa attended Mother of Sorrows School, Bridgeport, PA, and graduated from St. Matthew’s High School in Conshohocken, PA. Listening to the call of the Lord to religious life, Mary Theresa entered the Sisters of Saints Cyril and Methodius in Danville on January 9, 1947, was received as a novice on August 13, taking as her religious name Sister M. Paulette. She professed first vows on August 11, 1949.

Sister Paulette’s first teaching assignment was at the Villa School, Danville, in Grades 7 and 8. She was later missioned to parish schools in Connecticut, Illinois, New York and Pennsylvania. She also taught music on the high school level at Saint Cyril Academy, Danville. Music instruction for piano became Sister Paulette’s primary focus when she was part of the staff of the Villa Conservatory of Music in Danville. While residing at St. Methodius Convent in Danville, Sister Paulette also did clerical work in the Finance Office. After retiring to Maria Hall, Sister Paulette served as organist, planned the daily liturgies and continued to give piano lessons.

Sister Paulette was preceded in death by her parents, twin brothers who died in infancy, and her brother, the Reverend Francis G. Lendacky, who served in the Archdiocese of Philadelphia. She is survived by a number of cousins who live in California and Pennsylvania.

Remembered for her unassuming and gracious manner, Sister Paulette served the Lord unselfishly and generously. Her piano students have their learned proficiency and love of music to remind them of her competence and commitment to excellence. Now reunited with her parents and together with her priest brother, Father Lendacky, she deserves to be happily accompanying the praises of her Lord in heaven. And what a magnificent sound she is making now!