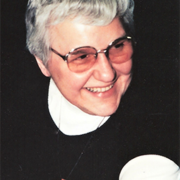 Frances Vranak was born in Chicago, IL, on March 5, 1932, the daughter of Frank and Mary (Duratinsky) Vranak.  She had two sisters, Theresa and Dolores.  Sister John Vianney believed her parents were the most powerful influence during her formative years, “laying the foundation of faith in our family and also transmitting to us a legacy of generosity and selfless service.”

Having entered the Sisters of Saints Cyril and Methodius in Danville, PA, Frances, now Sister M. John Vianney, was professed on August 11, 1954. She received a B. S. in Home Economics from Marywood University, Scranton, PA, and a Master’s in Home Economics Education from St. Louis University.

Sister John Vianney was missioned to parish elementary schools in Pittston and Bloomsburg, PA, and Gary, IN, and continued her ministry of education on the secondary level at Andrean High School in Merrillville, IN, and St. Pius X, Pottstown, PA. Sister taught in the Home Economics Departments in both schools.

Announcing Sister John Vianney’s entrance into heaven on the Andrean High School Facebook page elicited an incredible number of comments from Sister’s home economics students. Most recalled fondly Sister’s directions for using a spatula: “Scrape out all the goodness!”

When Sister was asked for her resumé, she often replied, “I have done every ministry in our congregation except gardening.”  Her ministerial history is proof of the accuracy of her statement:

Sister was involved in congregational administration as a member of the Leadership Team in Danville for eight years. Following this she became Administrator of Villa St. Cyril, a nursing home in Highland Park, IL.

Elected in 1988 as General Superior, Sister John Vianney served until 1992. During her term, the groundwork was laid for the Meadows at Maria Joseph Manor.  Also during her term, the chapel at Villa Sacred Heart was named a Basilica and was dedicated on November 26, 1989.  It is the only Basilica in the world under the patronage of Saints Cyril and Methodius.

From 2007-2010, Sister John Vianney was Director of the Jankola Library and Slovak Museum in Danville.

After serving the congregation in leadership roles, Sister John Vianney took on  the New Evangelization and ministered in a five-parish cluster in suburban Chicago. Sister then became a member and later chairperson of the European-American Advisory Board for the Archdiocese of Chicago and served as National Consultant for the Slovak Apostolate for the USCCB Office for the Pastoral Care of Migrants and Refugees.  She also served as the National Vice-President for the Midwest in the Slovak Catholic Federation.

Sister John Vianney participated in a project to preserve in written form accounts of the experiences of women religious in Slovakia, an endeavor which she called “Twentieth Century Martyrology.”

When Sister John Vianney retired from her very active ministry, she was engaged in the Ministry of Prayer and Hospitality at Maria Hall and later in Prayer and Presence and Companion to the Elderly at Emmanuel Center.

Perhaps God will allow Sister John Vianney some of her eternity to dabble in gardening in heaven!