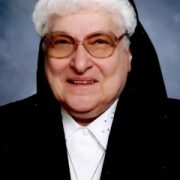 Sister M. Mercedes (Victoria) Voytko died on Sept. 8, 2016, at Emmanuel Center, Danville, Pa. Born on June 2, 1931 in Humboldt, Pa., she was the youngest child of Michael and Anna (Vantuch) Voytko.

Sister Mercedes attended elementary school at Saint Joseph School, Hazleton. After graduating from Saint Cyril Academy, Danville, in 1949, she entered the novitiate in Oct. 3. She was received as a novice on Aug. 10, 1950 and was professed on Aug. 13, 1952.

Sister Mercedes was a teacher in parish schools in New Jersey, New York, Pennsylvania and South Carolina, including Bishop O’Reilly in Kingston, Bishop O’Hara in Dunmore and Sacred Heart Clinic in Wilkes-Barre. She served as principal at Saint Joseph Schools in Nanticoke and Danville.

During her 13 years at Saint Joseph’s in Danville, Sister Mercedes taught eighth grade and served as high school religious education coordinator, pastoral assistant, Eucharistic minister and Director of Religious Education. She acted as secretary of the Danville-Riverside Area Ministerial Association (DRAMA), and was engaged in pastoral ministry part-time at the Danville State Hospital for seven years.

Sister Mercedes was a member of the Saint Vincent DePaul Society, Parish Board of Education, Parish Council and Council of Catholic Women. Well-known and active in Slovak circles, Sister Mercedes was Director of the Jankola Library at Villa Sacred Heart for 15 years. She was also a member of the Slovak League of America, Slovak World Congress and Slovak Catholic Federation.

Sister Mercedes was preceded in death by five brothers and three sisters, and is survived by many nieces and nephews.