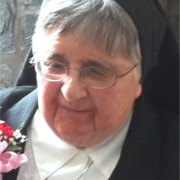 Anna Stasko was born in Perth Amboy, NJ, the daughter of Paul and Anna (Mucha) Stasko on April 16, 1929.  She attended Holy Trinity School in Perth Amboy and graduated from St. Cyril Academy, Danville, PA, in 1947.

Responding to a call to religious life, Anna entered the Congregation of the Sisters of Saints Cyril and Methodius a few months after her high school graduation on September 8, 1947, and was received as a novice on August 11, 1948. Now Sister M. Noel, she was professed on August 10, 1950.

Sister Noel attended Marywood University in Scranton where she received a B.S. in Education and an M.S. in Library Science.

For a long career in teaching Grades 1 through 8 in schools in Illinois, New Jersey and Pennsylvania, Sister Noel was a short but mighty presence in the classroom and also in the Principal’s office.  She served as Principal during her four years in Hazleton and fifteen years in Wilkes-Barre.

In 2001, Sister Noel became the St. Methodius Director of Special Projects in Danville. Directing the comings and goings of Marywood students pursuing health care courses in what had been the second-floor classrooms of St. Cyril Academy, Sister Noel was a welcoming presence and an able contact between the University and Villa Sacred Heart for the 11 years the program operated.

Despite pandemic restrictions on visitors in skilled care and because Sister Noel was in hospice care at Emmanuel, shortly before her death Sister Noel was permitted a visit by her family members. Her niece and great-nieces were able to joke and laugh with their favorite relative who had always enjoyed a lively exchange, and her favorite foods and beverages!

Sister Noel went home to God peacefully on October 20, 2020. Several family members were happy to be able to attend the Committal Service on October 26.