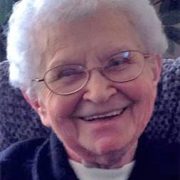 Sister Rosamund attended Saint John the Baptist School, Pittston. She graduated from Saint Cyril Academy, Danville, and entered the novitiate on Feb. 11, 1939. Sr. Rosamund was received as a novice on Oct. 17, 1939, the same day Cardinal Dennis Dougherty of Philadelphia dedicated the newly-erected chapel, which is now the Basilica of Saints Cyril and Methodius. She was professed on Aug. 18, 1941.

Sister Rosamund was involved in the ministry of education in parish schools in Connecticut, Pennsylvania and South Carolina, and served as superior and principal at Saint Columba School in Bloomsburg from 1971-1979. In 1980, she was elected to the SS.C.M. leadership team and served as assistant to the General Superior until 1984, when she returned to Saint Columba’s and taught fourth grade through 1988. Sister Rosamund taught secondary school at Saint Cyril Academy from 1948-67 and French at Andrean High School, Merrillville, Ind. from 1967-1970.

At Holy Ghost Parish, Olyphant, Sister Rosamund visited elderly parishioners and helped begin a Golden Age Club that enhanced the education and spiritual life of elders. From 1991-1994, she assisted in directing religious education and the RCIA program at Sacred Heart Church, Peckville, then served as administrator at Maria Hall, Danville, from 1994-98. She later served various ministries at Saint Methodius Convent and moved to Maria Hall in 2012, later becoming a resident of Emmanuel Center, Maria Joseph Continuing Care Community, Danville.

She is survived by a sister, Margaret Byrn, Emmanuel Center, a nephew, Thomas Luciano, Alameda, Calif., and several nieces.