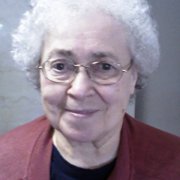 Mary E. Iskra was born in Wilkes-Barre, PA, the daughter of John and Veronica (Greytak) Iskra.  She received her primary education at Sacred Heart School in Wilkes-Barre, the first school in which the newly-established Sisters of Saints Cyril and Methodius taught after they were founded by Father Matthew Jankola.  She also attended St. Nicholas High School in Wilkes Barre. She later received a B.S. in Education from Marywood College in Scranton, having entered the Sisters of Saints Cyril and Methodius in Danville on February 2, 1956.

Sister Teresita taught the primary grades in a number of parish schools in Pennsylvania– Bloomsburg, Olyphant, Swoyersville, Luzerne, Nanticoke, Plymouth, Phoenixville, Waynesboro, and Wilkes-Barre. She also taught in Bridgeport and Torrington, CT, and Gary, IN. After her years in the Ministry of Education, Sister Teresita performed General Duties at Maria Hall in Danville. She engaged in the Ministry of Prayer and Hospitality, worked in the Host Department, acted as Receptionist and assistant Sacristan and took Sisters to their medical appointments. In 2018 she took up residence at Emmanuel Center during which time she engaged in the Ministry of Prayer and accompanying the elderly.

The staff at Emmanuel often expressed their gratitude to Sister and indicated they her presence there made a difference in their lives. She is greatly missed by the Sisters, her loving family members and all those who were the target of her broad smile.