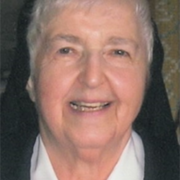 Sister Maria Zoé (Ann Therese Zollar) died on July 23, 2020, at Emmanuel Center, Danville.  Born on January 10, 1931, in Duluth, MN, she was the daughter of John and Anne Zollar. Ann Therese was one of six Zollar children. She attended St. Michael School and Cathedral Junior and Senior High Schools.  At the College of St. Scholastica she received a B.A. in Medical Record Library Science.

Ann Therese entered the Sisters of Saints Cyril and Methodius in Danville on February 2, 1961, and became a novice on August 2.

Assigned to Maria Joseph Manor, Sister Zoé served as a dietitian and did clerical work.  After serving as Retirement Coordinator at Maria Hall, Sister returned to Maria Joseph Manor as Assistant to the Administrator, a position she held for nine years.  Sister Maria Zoé served as the congregation’s General Secretary for four years and as a Secretary in the Development Office.

Sister Zoé was involved in Music Ministry at Our Lady of Mercy Church in Roaring Creek, a ministry that was dear to her heart and resulted in many life-long friendships. From childhood, Sister Zoé’s mother encouraged her and her two sisters to join the choir by saying, “God gave you good voices.  You should sing for Him.”  The SS.C.M’s can attest to Sister’s contribution to our liturgical services with her powerful voice.

Sister Zoé thought about religious life in her youth, but it was not until she was working as a supervisor in the medical records department at St. Anthony Hospital, Milwaukee, WI, that she thought more seriously about her future. She lived in a residence for hospital employees where he met Sisters Catherine Labouré, Gabriella, Rose Mary and Luke who also lived there while they studied at Marquette University.  When Ann announced her decision  to enter the Sisters of Saints Cyril and Methodius, a primarily teaching community, her mother encouraged her,  saying she knew her daughter’s talents would be put to good use.  She said, “No matter what you do, you will be doing it for the Lord.”  Her words proved true.

At her Committal Service on July 31, we laid to rest a Sister who had done many different things–all of them for the Lord.