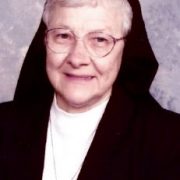 Sister Maria Goretti (Anna Marie) Hudak died on Feb. 16, 2018 at Emmanuel Center for Nursing and Rehabilitation. She was born on Dec. 15, 1929 in Hazleton to John and Anna (Jancar [Johnson]) Hudak.

She attended Saint Joseph School and graduated from Hazleton Senior High School. Before entering the Sisters of Saints Cyril and Methodius, Anna Marie worked in the office of the Plain Speaker-Standard Sentinel as a stenographer/bookkeeper. After entering the congregation in Danville on Feb. 2, 1950, she was received as a novice on Aug. 10, 1950, and professed on Aug. 13, 1952.

Sister Maria Goretti received a B.S. in Business Administration from Marywood University, Scranton, a M.B.A. from the University of Notre Dame, Ind. and an M.Div. from the Immaculate Conception Seminary, Seton Hall University, N.J. She taught fourth grade at Holy Trinity School, Perth Amboy, N.J. and Saint Cyril Academy, Danville, where she also worked in the school office. She taught novices and directed aspirants—young women seeking to discern a religious vocation. She served as director of religious education programs and was director of associates (women who participate in promoting and assisting in the ministries of the Sisters).

Sister Maria Goretti also taught in the business department at Andrean High School, Merrillville, Ind., for 10 years and served on diocesan find viagra committees, notably as president of the Pastoral Council of the Diocese of Gary. She then assumed the position of Pastoral Assistant at Saint Catherine Laboure Parish, Harrisburg, where she served in a variety of leadership roles, including president of the Sisters’ Council Liturgy Committee, Evangelization Committee, Ecumenical Committee and Vocation Committee. In 1988, she became a member of the SS.C.M. leadership team, a post she held until 1996.

From 1996 until 2009, Sister was the force behind the growth of the Maria Joseph Continuing Care Community, acting in various capacities as treasurer, development director and associate director at Maria Joseph Manor, Emmanuel Center for Nursing and Rehabilitation and The Meadows.

Sister Maria Goretti is survived by several nieces and nephews.