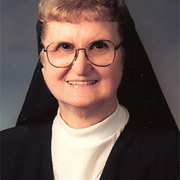 Elizabeth Helen Dluhy was born on January 10, 1928, in Chicago, IL, the daughter of Jacob and Elizabeth (Whyherek) Dluhy.  She graduated from St. Michael Elementary School and St. Casimir Academy, both in Chicago.  She entered the Sisters of Saints Cyril and Methodius on September 15, 1945, and was received as a novice, Sister Mary Gilbert, on August 13, 1946.

Sister Mary Gilbert studied at Marywood College and DePaul University where she received her Bachelor’s and Master’s degrees in Education. Sister taught grades K-8 in parochial schools in the Archdiocese of Chicago, and the Dioceses of Bridgeport, Charleston, Gary, Greensburg, Harrisburg and Scranton.

A devoted student of Sacred Scripture, Sister Mary Gilbert earned a Master’s Degree in Religious Education from St. Charles Seminary in Overbook, PA. Sister then taught Religion and Social Studies at St. Cyril Academy in Danville, and Religion in Grades 9, 11 and 12 at Lebanon Catholic High School, Lebanon, PA.   At several parishes in the Diocese of Harrisburg, Sister Mary Gilbert served as Director of Religious Education:  Prince of Peace in Steelton, Queen of the Most Holy Rosary in Elysburg, St. Stephen and St. Joseph in Shamokin, and St. Joseph in Danville.  At St. Joseph Church in Milton, Sister was the RCIA coordinator. Sister was a volunteer in Pastoral Services at St. Gregory the Great Church in Bluffton, SC.

Sister Mary Gilbert’s departure for heaven on Easter Sunday, April 12, 2020, was a sad and happy occasion. Sad for all those who knew her smile and laugh, and her affectionate greetings for those who visited her. Happy in that Sister Mary Gilbert could rejoice in the heavenly choirs resurrecting the Alleluias. The graveside service on April 15 contained many Alleluias in Sister Gilbert’s honor.