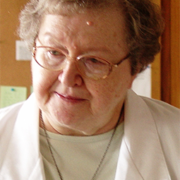 Sister Mary Paul (Lucy Kurator) died on February 10, 2021 at Geisinger Medical Center in Danville, PA.  Born in Gary, IN, she was the daughter of Paul and Mary (Pavlov) Kurator.  She attended Holy Trinity School in Gary, IN, and graduated in 1949 from St. Cyril Academy, Danville, PA.  She entered the novitiate of the Sisters of Saints Cyril and Methodius in Danville on February 2, 1950, was received as a novice on August 10 of that year and professed her vows on August 13, 1952.

Later she taught at her Alma Mater, Saint Cyril Academy in Danville, where she taught Religion, Latin and English.  Sister Paul’s longest assignment lasted 42 years at Andrean High School in Merrillville, IN.  She taught Religion and Latin there and served as Language Department Dean. She mentored a number of student teachers in Latin. Over the years, Sister Paul was moderator of the Freshman Class, the Latin Club and the YARC, the school club that hosted seasonal parties for mentally challenged children and young people.

Though Sister Mary Paul was noted for her scholarly achievements, she is also known for her interest in two athletic teams, not surprisingly the Notre Dame football team and the Chicago Cubs.

Sister Mary Paul was loved and respected by teachers and students alike at Andrean High School.  When news of her death reached the school, the website generated seven and a half pages of comments from Sister Paul’s many friends. The current principal, Mr. Jacob Knazur called Sister Paul “a devoted member of the Sisters of Saints Cyril and Methodius and proud Slovak.  She could be counted on for a family story, language lesson or warm hug.” A former student called her “the heart of Andrean.”  Another student said, “I remember her saying she would give an A to anyone who got her Notre Dame tickets.” One of her Latin students proudly wrote, “I still sing Jingle Bells in Latin to my kids.”

In 2017, Sister Mary Paul retired to Maria Hall, Danville, PA, where she was involved in the Ministry of Prayer and Hospitality. An exceptional conversationalist, Sister Paul and Sister Florence Marcin, her friend and equal in knowledge of every topic imaginable, extended many of their meals together with stimulating discussions. United now in heaven, they can pick up where they left off.

A graveside Committal Service took place on Monday, February 15th at 2:00 PM at the Sisters’ cemetery in Danville.