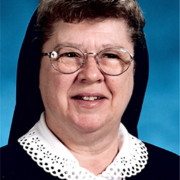 Sister Virginia Zapotocky died on August 19, 2020, at Emmanuel Center, Danville.  She was born on July 18, 1938, in Wilburton, PA, the daughter of Michael and Johanna (Vasil) Zapotocky.

Virginia attended Conyngham Township Schools and completed her elementary education at St. John the Baptist School, Mount Carmel, PA.  In 1956, she graduated from Our Lady of Mount Carmel High School.   On February 2, 1963, she entered the Sisters of Saints Cyril and Methodius in Danville, and became a novice on August 12 of that year.  At that time Sister’s religious name was Sister Maria Louis de Montfort. Sister made her first profession of vows on August 12, 1965 and celebrated 55 years of profession in 2020.

Sister  Virginia received a B.S. from Cabrini College, Radnor, PA, and an M.S. in Religious Education from Marywood University in Scranton.

Sister Virginia had a number of different ministries throughout her 55 years in religious life.  She taught in the primary grades in Charleston, SC, and Lebanon, Bloomsburg, Jessup and Harrisburg in Pennsylvania.  In the parishes she served, Sister Virginia was involved in the RCIA program. In 1984, Sister became the Director of the Religious Resource Center in Danville, a position she held full-time for eleven years. After having served as sacristan at St. Methodius Convent, Sister Virginia became sacristan at Maria Joseph Manor and engaged in pastoral ministry and other services there.  Following her last ministry at Sacred Heart parish in Lewistown and St. Jude parish, Mifflintown, Sister began the ministry of prayer and hospitality at Maria Hall.

At the graveside Committal Service for Sister Virginia on August 24, Father William Weary, pastor of Sacred Heart Church, Lewistown, led the service.  Also present were Father Jayaseelan Amalanathan, Father John Szada, Jr., and Father Gerard Heintzelman. Father Weary referred to two qualities of Sister Virginia: she had definite ideas about certain things and let everyone know them, and her laughter was distinctive and memorable.