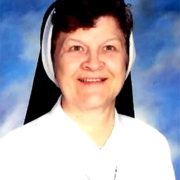 Sister Rosanne died on Friday, September 18, 2020, at Maria Hall in Danville.  Margaret Kmetz was born in Gary, IN, on September 23, 1932, the daughter of John and Elizabeth (Hreha) Kmetz.  She attended Holy Trinity School in Gary and graduated in 1951 from St. Cyril Academy, Danville.  She entered the Sisters of Saints Cyril and Methodius on September 8, 1951, and was received as a novice on August 13, 1952, taking the name Sister Rosanne. She professed first vows on August 11, 1954.

Sister Rosanne received a Bachelor’s degree in Education and a Master’s degree in Elementary Education from Marywood University, Scranton, PA. Her first mission was to St. Ann’s Home in Middletown, PA.  After serving the elderly there, she began her teaching ministry.  She taught grades two to eight in parish schools in Chicago, IL, and Gary and Whiting, IN. During the summer months she volunteered her services at the former Villa St. Cyril, Highland Park, IL, and Maria Joseph Manor, Danville, PA.  One summer Sister Rosanne taught English to the Vietnamese at Indiantown Gap for four weeks.  For three summers she taught remedial classes in Chicago. She and her sister, Sister Irene Rose, were in charge of the Religious Articles Shop at Maria Hall.

When Sister Rosanne was missioned to Maria Hall she served in various capacities, most notably as a Hospice Volunteer.  Two nights a week, Sister Rosanne took care of the one, two or three hospice patients who were on the fourth floor of Maria Hall in the Columbia-Montour Home Health Hospice, later Geisinger Hospice. Retiring only recently from this ministry which she loved, Sister Rosanne was a spiritual and devoted presence for the people so close to returning to God. No doubt they were among the many who welcomed Sister Rosanne when she was surprised to wake up in heaven on September 18.